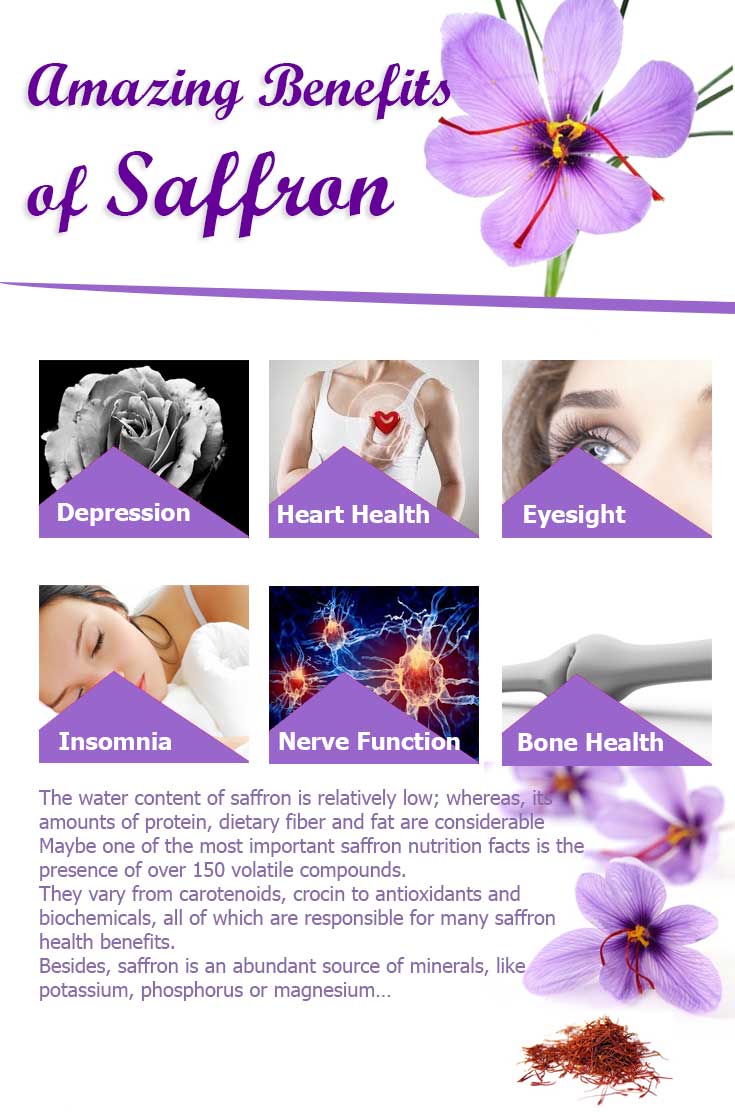 According to ancient Iranian medicine, saffron is warm and dry, and the medicinal properties of saffron are numerous. The most important property of saffron, which has long been used in the past, is the treatment of depression.

Saffron has a strong smell and bitter taste:
1) Eating saffron tea can cause digestion
2) The pain reliever effect
3) Regular.
4) It stimulates the nerves
5) Saffron is hematopoietic and facilitates blood circulation
6) Saffron consumption eliminates postpartum hemorrhages.
7) Strengthens sex drive
8) Cleanses and strengthens the liver
9) Cough removes and has a beneficial effect on the treatment of bronchitis
10) Cleanses the kidney and bladder
11) Calming and hypnotic
12) Saffron is anticonvulsant
13) Relieves gastric gas
14) Diuretic
15) And if you finally want to be happy and smiling always eat saffron
Source: Traditional medicine books

Description :
Because saffron has an effect on the reproductive system, pregnant women should avoid eating it because it may lead to miscarriage.

Saffron brew is essentially antidepressant and invigorating and helps improve gastrointestinal function; other medicinal properties of saffron include diuretic and therefore useful for kidney and bladder washing.Facilitation of digestion, gastric bloating, facilitation of blood circulation and hematopoiesis are other benefits as well as antioxidant and consequently anticancer properties. (Scientific name: Crocus Sativus)Saffron has euphoric properties and is nowadays used by some European pharmaceutical companies as an antidepressant integrator.

Crocin and safranal in saffron have a similar effect to fluoxetine and prevent dopamine, norepinephrine and serotonin reuptake and thus exert their antidepressant effect.Decreased serotonin levels lead to increased symptoms of PMS or premenstrual syndrome, and especially depression. Studies have shown that crocin and safranal in saffron prevent serotonin reuptake, thereby increasing serotonin levels and decreasing depressive symptoms in women with PMS.

Since depression is one of the most important factors in reducing libido, improving depression also increases libido. Overall, 2% of Iranian couples have infertility, with men accounting for 3%. Recent research suggests that “ROS: Reactive Oxygen Species” is one of the causes of male fertility decline.

In this way, “ROS”, especially free radicals, cause peroxidation of fatty acids and damage to the sperm cell membrane and its genetic content, thereby disrupting sperm motility as well as damage to DNA, resulting in poor fertilization. Carotenoids found in saffron, especially crocin and crocetin, which are antioxidants, block the oxidation of fatty acids in the membrane by preventing “ROS” activity, thereby enhancing motility and improving sperm morphology as well as sexual function in men.Saffron helps to prevent and improve cancer by limiting the synthesis of RNA and DNA in cancer cells, disrupting free radical chain reactions through the antioxidant activity of its compounds.
Carotenoid compounds also interact with the “Topoisomerase 2” enzyme, which is due to the cytotoxic activity of saffron and causes apoptosis of cancer cells.
Saffron is used as a food flavoring and dye for textiles in developing countries and by the expensive industry. In traditional medicine, saffron is used as a sedative, sputum, sexual stimulant and diuretic. In the tropics of Asian species, the paste is referred to as a paste that is a mixture of saffron and sandalwood, and this paste is used today as a relaxing moisturizer for dry skin.
5 / 5 ( 1 vote )